Biblical Insight: What’s A Dad To Do?

Voice Of Desert 3 years ago comments 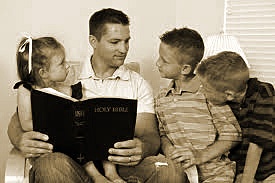 It is for discipline that you have to endure. God is treating you as sons. For what son is there whom his father does not discipline?

When the film Rebel without a Cause came out in 1955, it touched a nerve. Warner Brothers advertised it as a “challenging drama of today’s juvenile violence.” It featured three rising young actors—James Dean (as Jim), Natalie Wood (as Judy), and Sal Mineo (as Plato)—each portraying troubled teens responding to their fathers’ insufficiencies. Jim’s father was spineless, Judy’s, cruelly strict, while Plato’s father was absent. World War II reminded America of the importance of a father’s presence, but Americans spent the next decade—with dramas like Rebel without a Causeand comedies like Ozzie and Harriet—asking the question, “What’s a dad to do?” We still suffer as a culture for lack of understanding the role of a faithful father.

Hebrews 12 was not written as a prescription for earthlyfathers, as much as its wisdom might apply to them. Rather, it was an exhortation to suffering Christians to cling to theirheavenly Father. The author of the epistle pointed out that the trials, hardships, and difficulties Christians experience should sometimes be understood as an expression of God’s discipline—discipline that is ultimately for the believer’s spiritual welfare.

Sadly, when English speakers hear the word “discipline,” punishment most often comes to mind. But the Greek word can mean, more broadly, “guidance for proper living.” Biblically speaking, then, discipline is often as much about tender formation as it is about firm correction. When believers suffer for bearing the name of Christ, they need not conclude God has abandoned them or that He is punishing them for some wrong done—far from it! Trials only affirm that God is forging fidelity in the recesses of their hearts. Or, as the author of Hebrews put it, even though “for the moment” all discipline seems painful, it eventually “yields the peaceful fruit of righteousness to those who have been trained by it” (v. 11). In other words, the fruits of discipline form faithful Christians!

Like any loving father, God uses the means of both formative and corrective discipline to help Christians more fully reflect the character of Jesus. Sanctification, the process whereby God brings his children to spiritual maturity, is a sometimes painful experience. Mature Christians come to recognize that the trials and difficulties they experience are not evidence of God’s arbitrariness, anger, or absenteeism. Instead, they understand that every trial is a manifestation of His love. Those He loves, He disciplines (v. 6).

What’s a dad to do? Dads dare to discipline. As a faithful Father, the Lord disciplines His children through many and various trials, tests, and corrections. The reality of the Christian life is that discipline is a part of discipleship. Helping individuals and congregations understand the shaping role of discipline is a crucial component of Christian leadership. Perceptive counseling can assist Christians to see the events in their lives as palpable evidences of the Father’s love and turn whining into gratitude and fickleness into faithfulness. In the process, those who understand the discipline of the Lord might even one day become better parents themselves!( Kairos Journal )

Voice Of Desert, Copyright 2020. All Rights Reserved. 218284 Website Designed and Developed by: CreaveLabs